In this ultimate guide to buying tuna, I explain the difference between ahi tuna, yellowfin tuna and albacore tuna (and whether they mean the same thing), where to buy it, what to look for to find the freshest tuna, and whether you really need sushi-grade ahi tuna.

Purchasing tuna, and all forms of seafood, can be an anxiety-inducing experience. How do I know the fish is fresh? What do the different names mean? Is this fish the same as one with a similar name? Where should I purchase it? These are all questions I’ve had before, so I created this ultimate guide to buying ahi tuna to help provide you with confidence!

What is Ahi Tuna?

Tuna is a group of fish, containing dozens of different fish. The most common types of tuna are: Skipjack, Albacore, Yellowfin, Bigeye and Bluefin.

Ahi tuna, or a species of tuna, is actually the Hawaiian name that covers to different types of tuna. It is most popularly known for being used in poke bowls or seared and served rare.

Ahi vs Yellowfin vs Albacore Tuna

Appearance: Its fleshy meat is more reddish in color.

Yellowfin tuna is a sub-type of ahi tuna. Yellowfin tuna can be found along the West Coast of the United States as well as the North-East and is less commonly found than albacore tuna, hence the more expensive cost. It is named so because of its yellow markings around the fin.

Appearance: Its fleshy meat is more pink in color than traditional ahi tuna.

Albacore Tuna, aka White Tuna, is a type of tuna, but not a type of ahi tuna. It is much smaller than ahi or yellowfin tuna and more commonly found, causing it to be less expensive. The meat is more firm and lighter or mild in flavor. Albacore tuna can be found along the West Coast of the United States as well as areas in Europe. It is often used to make canned white tuna.

There are many places you can purchase ahi tuna. The main takeaway is to use a trusted source, like a local or online fish market.

In-Person: Trader Joe’s, Whole Foods, Gelson’s or try your favorite grocery store. (I will personally say I do not like the quality of the frozen ahi tuna from Trader Joe's.)

Things to Look for when Buying Ahi Tuna

The color of ahi tuna steaks range from a deep red to pink. Steaks should be moist, shiny and almost translucent.

Avoid tuna steaks that are dull, matte or brown. The longer the tuna meat is exposed to oxygen, it will begin to oxidize and turn brown, meaning a brown tuna steak may be old. Also avoid any large gaps between the muscles of the steak where it seems to be flaking off.

Tuna should have a fresh sea smell, not an overwhelming fish smell.

While color is a great indication of freshness in ahi tuna, some brands will actually add food coloring to make the fish appear a brighter pink color and mask any unfresh color. This is definitely NOT what we want, so make sure to double check the nutritional label and ingredients.

Do I really need to buy sushi-grade ahi tuna?

Sushi-grade is another term for the highest level of quality and freshness. It also means you can consume the fish raw. However, the FDA does not regulate the term sushi-grade, it only created a list of processes to handle fish for raw consumption.

As with any meat or seafood, the only real way to avoid parasites or bacteria is by properly storing and freezing the fish, or to cook it. The best part is that cooking tuna steaks is an extremely fast and easy process: sear the tuna for less than a minute on each side and you’re ready to go!

For some ideas on cooking ahi tuna, try any of the below: 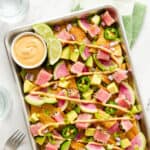 How do you know if ahi tuna is bad?

The best way to know if ahi tuna is bad is to smell it and look at it. If it has a sour smell, or dull grey-ish color, it is not fresh.

Can you eat ahi tuna from the grocery store raw?

If purchasing extremely high-quality ahi tuna that has been frozen and stored at the proper requirements set by the FDA, you can eat ahi tuna raw. However, the safest way to consume ahi tuna is seared and served rare.

What if I buy frozen tuna steaks?

Frozen tuna should be kept in the freezer and then defrosted in the refrigerator before consuming.

For clean eats and drinks recipes sent directly to your inbox!

Hey there, I’m Elise! I use fresh, simple ingredients to make a healthy lifestyle more accessible. With clean ingredients, these recipes will make your heart and belly happy. Thanks for making me a part of your cooking journey!